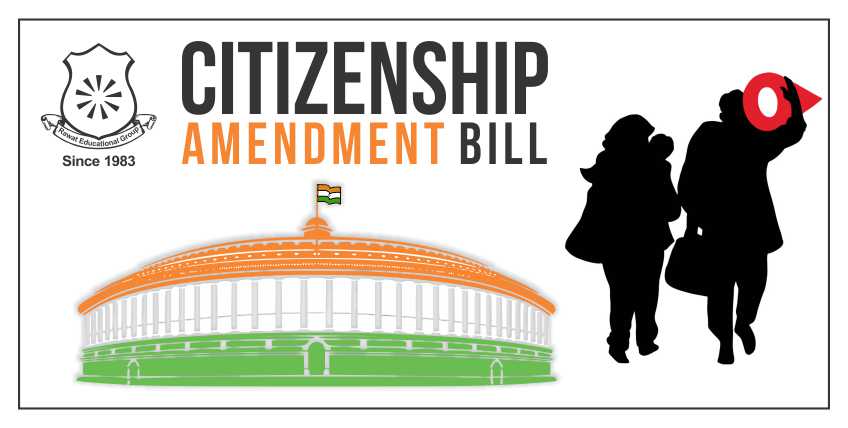 What is Citizenship (Amendment) bill?

The previous act had provisions for people living in India to receive citizenship through naturalization. According to the previous act a person must have lived in the country for 11 years preceding the application submission of citizenship. This bill reduces that to 6 years.

The Citizenship (Amendment) Bill (CAB) has been passed in Lok Sabha and was debated in the Upper House. It seeks to change the basis of Indian citizenship by legalizing religious discrimination. The biggest drawback of this bill is that it divides people on the basis of religion which is against the values of our constitution.

It seeks to amend the definition of illegal immigrant for Hindu, Sikh, Parsi, Buddhist and Christian immigrants from Pakistan, Afghanistan and Bangladesh, who have lived in India without documentation. They will be granted fast-track Indian citizenship in six years.

After hours of intense debate, the Lok Sabha passed The Citizenship (Amendment) Bill, 2nd Dec 2019, Monday. The legislation seeks to make it easier for non-Muslim refugees from Pakistan, Bangladesh and Afghanistan to gain citizenship in the country. The legislation is applicable to groups who arrived in India on or before December 31, 2014.

The Bill also makes amendments to provisions related to OCI-(Overseas Citizen of India) cardholders. A foreigner may register as an OCI under the 1955 Act if they are of Indian origin (e.g., former citizen of India or their descendants) or the spouse of a person of Indian origin. This will entitle them to benefits such as the right to travel to India, and to work and study in the country. The Bill amends the Act to allow cancellation of OCI registration if the person has violated any law notified by the central government.

The bill also exempts certain areas in the North-East from this provision. The Bill also makes amendments to provisions related to OCI cardholders.

How will the bill benefit refugees?

The Bill says that on acquiring citizenship: (i) such persons shall be deemed to be citizens of India from the date of their entry into India, and (ii) all legal proceedings against them in respect of their illegal migration or citizenship will be closed.

Is the bill applicable throughout India?

The Bill says that the provisions on citizenship for illegal migrants will not apply to the tribal areas of Assam, Meghalaya, Mizoram, or Tripura, as included in the Sixth Schedule to the Constitution. These tribal areas include Karbi Anglong (in Assam), Garo Hills (in Meghalaya), Chakma District (in Mizoram), and Tripura Tribal Areas District. It will also not apply to the areas under the Inner Line” under the Bengal Eastern Frontier Regulation, 1873. The Inner Line Permit regulates visit of Indians to Arunachal Pradesh, Mizoram, and Nagaland.

Why the Northeast is against the Bill?

The bill tries to discriminate between religions and ignores Muslim minorities in neighboring countries. But, the biggest concern of people in Northeast is that the bill undermines the effect of the Assam Accord signed in 1985. According to the Assam Accord, any person who can’t prove their ancestor’s presence in India before March 24 1971 will be deemed as an illegal immigrant.

The Assam Accord didn’t discriminate on the basis of religion and it ended the 6-year long agitation against illegal immigration in the state of Assam. However, the Citizenship Amendment Bill has tried to change the definition of illegal immigrants and excluded religious minorities from the illegal immigrant list.

This has caused a lot of distress in Assam as it violates the Assam Accord.  Asom Gana Parishad, an NDA ally in the state has threatened to break ties if the bill is passed. This bill has caused communal divides in Assam to resurface which is not good for the growth of the Northeast.

The intention of the Bill

The problem arises when the government ignores Muslim religious minorities like Shias and Ahmadiyyas. Muslim minorities also face a lot of discrimination on the basis of religion. This can raise a question on the intention of the government behind the bill. The ideological leanings can also be seen through this bill. This bill promotes a hardline approach to the problem rather than a humanitarian one.

What happens to the NRC?

Bengali Hindus who were declared illegal immigrants by the NRC are now legal by the current clauses of the bill. This nullifies the process of NRC and seriously affects the demographic of the region. This bill does not clear the plan and leaves the future of people undecided. Confusion regarding the NRC can prove fatal for the process as it is coming to an end. This bill can undo a lot of hard work and can destroy the hopes of the people of Assam. The dilemma has been caused due to this process and what lies ahead is still a big question mark for the people of Assam.