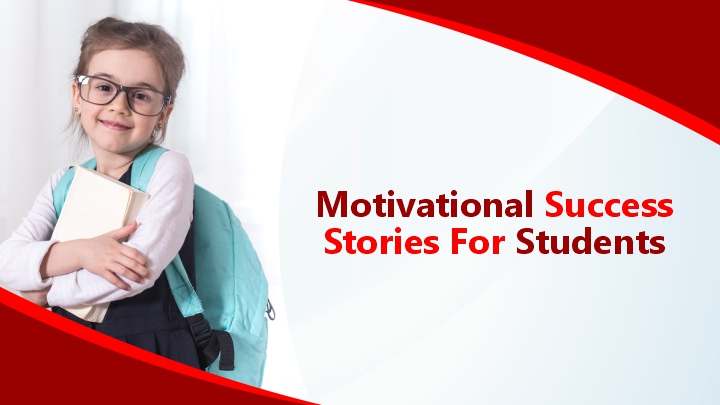 Learning in students is split into two. Some students want to learn and explore new, distinct, and creative things, while others follow famous and successful personalities to get motivated, moreover like them become successful. However, for some other students, the support of teachers and parents only works.

Stories play a great role in turning anyone's life from worst to best. It’s the favorite area of students that motivate them to do something great in their life. This is the reason why in most schools’ teachers use this alternative to inspire children in different areas.

This included various folk stories with a necessary moral at the end, real-life examples of successful persons, and ordinary stories of normal people who are connected with their life journey.

Here we have gathered some of the best success stories for students that will turn out beneficial for them to become successful, and go in the long run.

The professor solves the question by answering that the actual weight of the glass filled with water doesn’t matter, but what matters how long you hold the glass.

If you hold the glass for a minute, you won’t feel much weight. But if you hold it for 10 minutes, then you will feel more weight, as the hours extend the weight icreases. Similarly, in the case of stress. If you carry stress for a while and leave it, then it's fine, but if you think about it for long, it will become a problem, and make your life from better to worse.

2. Shake off Problems
A man and the donkey were gazing, the donkey fell into a huge pit. The man tried hard to pull his favorite donkey up, but he became unsuccessful. However, he can’t leave the donkey-like this, and let him die in pain. So, he decided to bury him alive and make his death smoother. He started pouring soil over the donkey in the pit. When he poured the soil, the donkey felt the load and shakes it off, and he steps on it.

He use to do this every time, the soil poured on his body. Eventually, he reaches ground level and can walk again.

3. Seeing opportunity in Obstacles
There was a wealthy king who decided to test his fellow people to know who got a good attitude in life, and who will dedicate some time to country growth. So, he decided to place a huge boulder amid the road, and hid nearby to see who will make an effort to remove it. He saw many strong people passing but some ignore it, and some blamed the king. Later, a peasant with a load of vegetables saw the boulder. He makes a lot of many efforts to remove it, and in the end, finally became successful. He saw a purse lying in the place of the boulder, it contains gold coins and a note which read ‘This is the reward for the person who moves the boulder away from its place’.

4. Struggles develop Strength
One day a man was passing from a garden, where he saw a butterfly cocoon that is struggling to take its body out of it. Enduring its efforts, but there is no progress. He thought to help the butterfly by cutting the cocoon with the help of a scissor. So, the butterfly came out easily, but his wings were shrivelled and the body was tiny and withered.

Unfortunately, the butterfly couldn’t fly and spent the rest of his life crawling with a wounded body.

5. The Group of Frogs
Some frogs were passing from woods, and two of them accidentally fell into a pit. The other frogs who are safe upside saw no hope from the frogs to escape. Both the frogs tried hard to come out but failed many times. The frog's upside shouted that stop trying, and give up, as it is impossible to come out.

Among the two frogs, one frog stops trying and gives himself to death, while the other frog anyhow at the last manages to reach on top.

When the frogs asked, “Did you not hear us?” He explained that he was deaf and thought other frogs were trying to motivate him to get out.

6. The Elephant Rope
A man was walking beside a group of elephants who were tied to a small rope to their front leg. He was shocked to see that the elephants were not even attempting to break the rope and free themselves. The elephant trainer who was standing there claimed in a puzzled state of mind that “when they are young and smaller, they use the same rope to tie them, that time this small rope is enough to hold them all together. However, as they grew up, they believe that the rope can still hold them, so they never tried to break them free”.

7. Kentucky Fried Chicken
Based on a real story of Colonel Harland Sanders who even after having umpteen failures, at the last succeeded and inspire many with his life. He is a seventh-grade dropout who started selling chicken at the age of 40, however, his dream to open a restaurant dropped down several times due to conflicts or wars. Later on, he also attempted to franchise his restaurant. His recipe was also not accepted and got rejected 1009 times before the final approval. But, at the last his secret recipe, “Kentucky Fried Chicken” became famous worldwide and the company was sold for 2 million dollars. His face is still celebrated in the logos.

8. Shark Bait
A marine biologist put a shark and some tiny bait fishes into a big tank. Shark didn’t wait to attack those fishes and ate them. Later, the biologist inserted fiberglass into the tank which divided the tank into two and the shark remain on one side. Like before, small bait fishes were again sent to the other side, the shark attempted many times to eat them, but was always hit by the fiberglass, and lastly gave up. After seeing this, the biologist removes the tank, but this time shark didn’t attack the fishes, as the shark always thought of a false barrier in the tank and stopped the attempts.

We hope the above motivational success stories for students will be beneficial, inspire them, help in their overall development, and make them successful in the end.